Does the time of day that carbohydrates are eaten really matter? 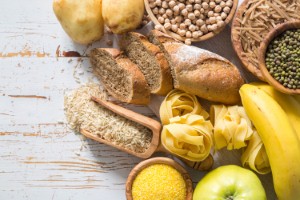 UK doctors have been exploring whether the time of day that carbohydrates are consumed affects the body's ability to break them down effectively rather than store them as fat.

Dr Adam Collins of the University of Surrey has been working with the BBC's Trust Me I'm a Doctor programme to investigate the matter, enrolling volunteers in a ten-day eating plan to see how their bodies reacted to carbs at different times of day.

At the start of the study, Dr Collins said: "It's always made sense to me that we process carbs better if we have a whole day of activity ahead. So, I expect having most of their carbs at breakfast will be easier for their bodies to cope with.

"But we don't really know what happens if you regularly follow an evening-carbs diet. There's never been a study like this before and, as a scientist, I'm excited to see what happens."

Participants' blood glucose response levels were tested at the end of each five-day period, but it appeared that the body was able to break down the sugar found in carbs just as effectively if the majority of the day's carbs were consumed in the morning as at night.

Instead, Dr Collins believes that the main factor determining the body's ability to break down carbohydrates into energy is the gap of time between consuming them. If there are several hours between high-carb meals, the body will have had time to recover from its breaking down carbs efforts, and will be ready for the task again.

This therefore suggests that it is not the time of day that they are consumed that is most important, but rather that they are eaten in moderation as part of a healthy, balanced diet.

Mediplacements is a genuine specialist medical recruitment company. Contact us to see the latest dietitian jobs.