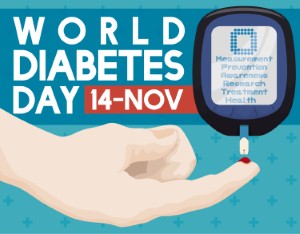 Managed by the International Diabetes Foundation (IDF), this year's event is centred around the theme 'Eyes on Diabetes', which is all about educating people on the potential signs of diabetes and encouraging them to go for screening tests to ensure the disease can be caught as early as possible to prevent long-term complications.

To coincide with World Diabetes Day, the organisation has published new statistics that show how diabetes diagnoses are increasing across the globe. For example, some 415 million people were living with the condition in 2015, but this is predicted to rise to 642 million by 2040. Of these, more than one-third are likely to also be diagnosed with diabetic retinopathy, which is a common complication of diabetes, leading to visual impairment and potentially blindness.

With this in mind, significant action is needed to encourage people to make changes to their lifestyles, as obesity is one of the main risk factors for type 2 diabetes development. In fact, the IDF believes that as many as 70 per cent of type 2 diabetes diagnoses up to 2040 could be prevented or delayed if people adopt healthier lifestyles. Overall, this equates to some 160 million cases of the disease.

However, figures also show that one in two adults who have diabetes do not know that they have the condition, meaning they could unknowingly be putting their health at further risk. Unstable blood-glucose levels can potentially lead to dizzy spells, the risk of gangrene due to poor circulation, and even death.

Therefore, all medical professionals have a key role to play in encouraging people to make healthy lifestyle changes, which would not only help to improve public health in the long term, but also cut the sum that global health authorities currently spend on treating diabetes. At the moment, 12 per cent of all global health expenditure goes towards diabetes care.